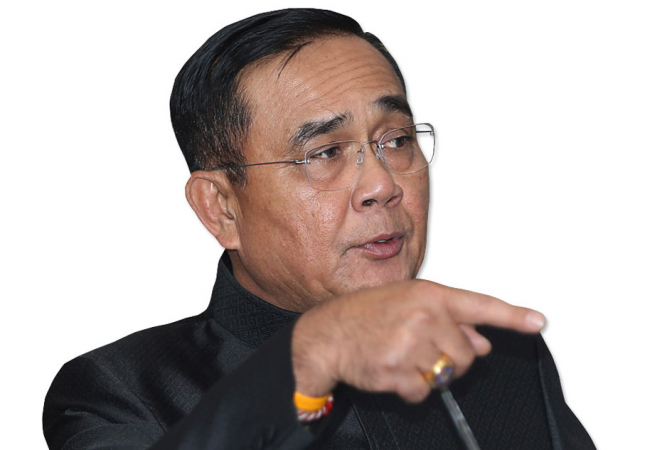 Prime Minister General Prayut Chan-o-cha has decided to chair the Council of Economic Ministers, but will he be able to make any difference to the country’s economy with a looming currency war, ongoing trade wars and the current domestic economic woes?

Apparently, he will be replacing Deputy Prime Minister Somkid Jatusripitak, who was responsible for economic affairs under the previous junta-led government. Somkid failed to win any recognition for his work, and latest opinion polls suggest that people are sceptical about the new government’s ability to carry out its election pledges.

However, Prayut has decided to take the leadership not because he knows more about economy than Somkid, but because he wants to coordinate the work of different ministers representing parties in the coalition.

“I think Somkid is still the real head of the economic team, but Prayut may be helping to coordinate with ministers from different parties,” said Pipat Luengnaruemitchai, assistant managing director at Phatra Securities.

Now the question is, will Prayut and Somkid manage the economy better together than Somkid on his own?

The transition to a civilian rule may provide some leeway, as many countries – who had refused to make trade deals with the junta-led government – may change their mind.

The European Union and the US may be willing to sign free-trade deals with this government, as it is an elected one, said Titipol Phakdeewanich, dean of the political science faculty at Ubon Ratchathani University.

Vietnam and Singapore, both competitors of Thailand, have signed free-trade deals with the US and EU and are in a position to boost their exports. Thai exports, meanwhile, have been suffering a severe contraction, especially due to the global economic slowdown.

US Secretary of State Mike Pompeo recently said in a visit to Thailand that he welcomed the new government and promised to work with Prayut.

Titipol, however, was cautious. “The West may still keep a close eye on Thailand to see if the country is really returning to democracy and if the new government upholds human rights,” he warned.

This is partly because local and foreign academics, as well as international media, have accused the military of rigging the March elections to favour its allies at the expense of other parties.

Whether Thailand will return to genuine democracy will be judged by how the government amends the military-sponsored Constitution. The opposition parties, especially Future Forward Party, have been pushing for amendments that will make the Constitution more democratic.

Titipol is sceptical, saying the coalition may push the amendment of the charter in such a way that it affects FWP’s growing influence and popularity. The current system of counting votes more or less favours new political parties such as FWP, he said.

The government also failed to win any support when presenting its policies in Parliament, with the opposition MPs firing back during the debate, saying nothing on offer was concrete.

Independent economist Pairoj Vongvipanond also said the policies presented were vague. This is because the parties that joined the coalition did not have enough time to put together a concrete plan of action.

“This was one of the worst policy platforms ever,” Pairoj said.

While the strengthening of the baht has been partly blamed for the contraction in exports, potential negative impact on tourism and local consumption, Pipat said he has yet to see an effective solution to deal with the currency appreciation. He said the central bank’s latest measures to curb short-term capital inflow is likely to be ineffective, because the amount of capital flowing in is relatively small compared to Thailand’s current account surplus accumulated for several years, he said.

The current account surplus driven by tourism income and a low level of investment is the real cause of the baht’s appreciation, and so far, no clear action has been taken to deal with it, he said.

The government’s flagship Eastern Economic Corridor project may draw some investment, but it will not be much initially, Pipat added. It also remains to be seen if foreign investors are willing to put their money in the region.

The recent blasts in Bangkok have further complicated the investment climate, and if there are more such explosions, it might significantly damage the confidence of both investors and consumers.

A Japanese diplomat, who asked not to be named, told The Nation that Japanese expats in Thailand were worried about the incident.

Given a slowdown in global growth, the threat of a prolonged US-China trade war, and the impacts of drought and deepening local economic slowdown, Prayut and his Cabinet face a lot of challenges ahead.

“All engines of growth have apparently been subdued and there is a perfect economic storm waiting to hit us,” Pipat said.

The first line of defence was the Bank of Thailand’s decision to cut the policy rate on Wednesday by 25 basis points to 1.5 per cent in a move to shore up the economy. However, it remains to be seen how much it can actually stop the economy from sliding below the 3-per-cent growth.

The rate cut may also encourage commercial banks to cut their interest rates, providing some relief to consumers and investors. However, given the sheer scale of economic risks, it will require smart moves by the government to deal with it.