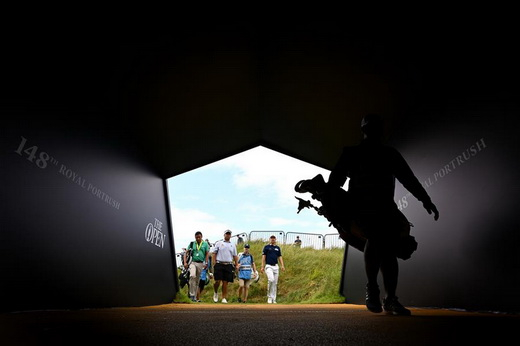 Thailand's Kiradech Aphibarnrat and Jazz Janewattananond walking between holes during a practice round prior to The 148th Open.

Portrush -  Thailand’s Kiradech Aphibarnrat hopes to back up the old saying- ‘beware the injured golfer’ by playing through the pain barrier and putting up a performance he can be proud of at The 148th Open which starts on Thursday.

The decorated Thai, who won the Asian Tour Order of Merit in 2013 and is also the first Thai to hold a PGA TOUR card, has been struggling with a knee injury, which is unfortunately not showing much signs of improvements.

“I’ve been struggling and I cannot hit a lot of balls. I cannot force myself but I’m trying to hang in there and play in every Major,” said Kiradech, who is making his sixth appearance at The Open.

While Kiradech’s knee injuries may possibly hamper his progress at Royal Portrush this week, the 29-year-old remains optimistic of a good showing as he tees off alongside England’s Ian Poulter and Korea’s Sungjae Im in the opening round of the year’s fourth and final Major.

“I’ve been struggling the past few months but I don’t want to make any excuses as I always try to play my best golf each time I tee up for a tournament.

“Having said that, it’s always exciting to be back at The Open. It’s a historic event with many great champions and good crowds. I just want to do my best this week and if I can play all four rounds, it’ll be fantastic,” said the world number 52.

Kiradech will have the company of fellow countrymen Jazz Janewattanond, Prom Meesawat and Gunn Charoenkul at The 148th Open this week and has signaled Jazz as the next big star to look out for from the Kingdom.

“Jazz is one of the best players from Thailand now and has been improving a lot the last two years. I believe it’ll not be too long before he breaks into the top-50 in the world.

“Hopefully, he can be the next Thai player to join me over in the States and I have one more friend over there,” said Kiradech.

Jazz will be seeking to validate Kiradech’s assessment of him and continue to establish himself as one of golf’s brightest stars.

The 23-year-old is currently leading the Asian Tour Order of Merit and money list on the Japan Golf Tour and announced his arrival on the world stage with a commendable tied-14 place at the PGA Championship in May, which was also the best result by a Thai at that Major.

“I know I’m in good form but it’s going to be totally different challenge this week with the course, weather conditions and the type of grass,” said Jazz.

Jazz will have the company of Americans Aaron Wise and Billy Horschel in his opening round and will be hoping to conjure the same magic that has seen him win twice on the Asian Tour this season.

“This will be the week that stands out from the rest as we (Asian players) hardly get the chance to play links golf. Putting form aside, hopefully we can get lucky here,” said Jazz.