Nishino, right, and FAT president Somyos, left, at the press conference in Tokyo on Friday.

Akira Nishino vowed to take Thailand to the Fifa World Cup as he signed an official deal to coach the Kingdom’s national team and U23 squad during a press conference in Tokyo on Friday.

The 64-year-old former Japan manager publicly confirmed his commitment to Thailand, finally putting to bed online reports that he would turn down the offer.

“I went to talk to Thai FA president Somyot Poompanmoung in Thailand and realised that he has a strong determination to elevate the standard of Thai football,” Nishino told media gathered at Tokyo’s New Otani hotel.

“After I returned to Japan and considering things, I decided to take the job to coach the national team and the U23 team,” added the former coach of J-League champions Kashiwa Reysol.

Nishino faces a daunting first test as Thailand coach, as he is expected to plot a win over arch-rivals Vietnam in the home leg of the World Cup Asian Qualifiers on September 5. Thailand have been drawn in a tough group alongside the United Arab Emirates, Malaysia and Indonesia.

“In terms of football in Asia, there is a big wall [to climb] as there are some tough competitions where you can fail in the qualifying rounds. I may have coached J League teams and the Japan national team before, but to become head coach for a foreign team is not easy. Thailand have to play qualifying rounds for some tough tournaments,” Said the Japanese manager. 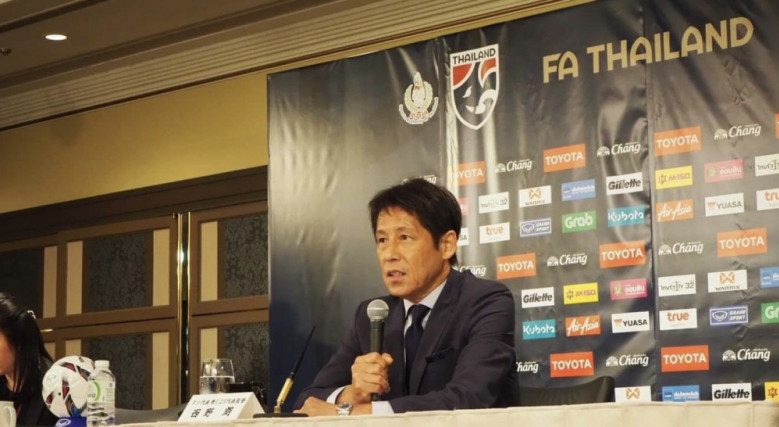 Nishino, who coached Japan to the 2018 World Cup round of 16, says he is determined to help Thailand reach the finals of the world’s biggest sporting event.

“To elevate a team to a higher level is what makes me happy as a coach. ... I intend and will make all efforts to get Thailand to the World Cup,” he added.

Nishino said that he already watched Thai players but still had no idea how they would perform in the game against Vietnam. But he warned that it was not easy to get a group of players to adjust to each other’s style and achieve good results.

“I will try to strengthen the Thailand team and lift them to another level so they can compete with teams like Japan,” he said.

The deal between Nishino and the Thai FA is rumoured to be worth around Bt30 million per year, which would be the most lucrative coaching contract in Thai football history.