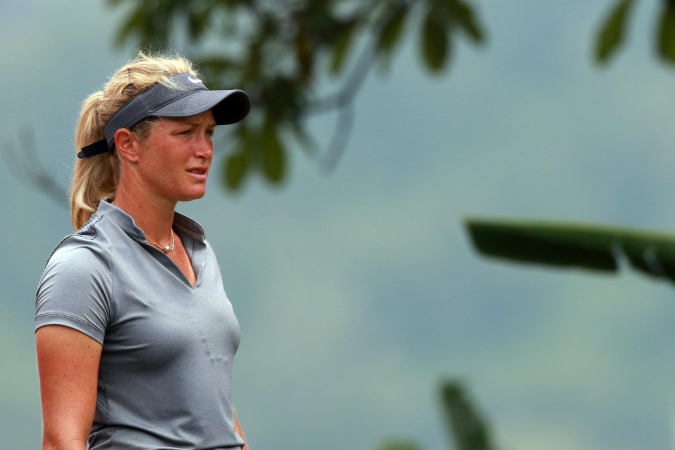 15-time LPGA winner Suzann Pettersen is back in action for this week’s CP Women’s Open, making just her third start since the 2017 CME Group Tour Championship after taking maternity leave for the 2018 season.

Despite her limited playing schedule, just one week ago Pettersen was announced by European Solheim Cup Captain Catriona Matthew as one of her picks for the 2019 Solheim Cup. Pettersen admitted that she wasn’t positive she would return to the LPGA at one point during her extended leave but is fully back in the swing of things with her eyes set on Gleneagles.

“I am just really excited to be out playing,” Pettersen said on Wednesday at Magna Golf Club. “The fun of playing this game has definitely come back to me. At times I probably been one of the toughest there is out here, especially on myself and to my own expectations. I wouldn't say I have no expectations, but I'm a lot more laid back. I still know what my game should be like and how I want to play. Obviously the good stuff is great. There is still some rust in there. Like I said, the more I play, the better the overall game gets. I feel very confident that by the time Solheim is around I'll be in top form.”

For the first time since her son Herman was born last August, Pettersen will be away from him for an extended period, playing in Canada this week and in Portland next week. While it’s challenging to return to the LPGA Tour and not see Herman, she’s feeling great about her game and has a fresh perspective as a mother.

“I'm kind of creating new routines. I'm not trying to pick up where I left it because priorities are different; my time is a little different,” said Pettersen, who is also celebrating the 10th anniversary of her 2009 CP Women’s Open victory. “But these two weeks I left everyone at home so I can kind of get the preparation and the hard work done for what's coming in three or four weeks. I thought that was my best option. I would just love to go out and compete, get sharp. For each shot that I hit, each round that I play, I feel like the game is getting better and better. So, no, I feel great. Obviously great to be back, see all the other players. Some players I haven't seen for almost two years.”

Pettersen will tee off the first round at 8:21 a.m. off the first tee on Thursday alongside Solheim Cup teammate Bronte Law and Team USA hopeful Ally McDonald.

Liu, who earned a spot in the field after finishing as the low Canadian amateur at the 2019 Canadian Women’s Amateur, was in awe of her experience so far in her first-ever professional event.

“I'm looking forward to being able to play with even more great players, especially in like the environment of a professional golf tournament,” said Liu, who understandably named defending champion Brooke Henderson as the player she was most excited to see. “I think it's definitely going to be a challenge for me and my mental game to be able to focus and like keep my mind on like each and every shot.”

Alena Sharp has been on the LPGA Tour since 2005 and has certainly seen the strength of Canadian golf grow over her tenure.

“It's very nice to see a lot of Canadians playing in the field this week. There are a lot of Canadians doing really on the Symetra Tour. I know that they're working hard to get out here, and I think golf in Canada is on the rise,” said Sharp, who is competing in her 16th CP Women’s Open. “Obviously with Brooke leading the way with her win last year it's really put Canada on the map. It's nice to see that the hard work that Golf Canada is putting in in their programs is coming to light.”

In 2019, there are seven Canadian players on the LPGA Tour – Henderson, Kane, Maude-Aimee Leblanc, Jaclyn Lee, Brittany Marchand, Sharp and Anne-Catherine Tanguay, with Kane and Leblanc playing limited schedules. Canada is also well-represented on the Symetra Tour, with five to 10 Canadian players competing in any given week. There are 20 Canadian golfers at this week’s Stage I of LPGA Qualifying School in Palm Desert, Calif., the most of any country other than the United States. Many of these players came up through Golf Canada’s strong developmental program, a thread that ties these golfers together as they grow their careers.

“We're really, really tight. I mean, to have five Canadians full time on the LPGA this year, it was big. I mean, we play our practice rounds together; we go out to dinner. We really try to support each other in every way we can,” said Tanguay. “Jaclyn Lee being here this week and she's injured, so I just had a conversation with her about that injury. We're trying to support her and be there for her. It's just been really, really cool having some role models as well. Like I try to be a role model for the younger girls. I was fortunate to have Alena that was there and Lorie Kane that came before me and did that for me. So I'm happy to do it too for the younger girls.”

Since CP assumed title sponsorship in 2014, the CP Women’s Open has raised $8.5 million in support of children’s heart health.

The 2019 tournament benefits SickKids Foundation, which raises funds on behalf of The Hospital for Sick Children, a pediatric teaching hospital in Toronto. The foundation is Canada’s largest funder of child health research, learning and care. The funds raised at the 2019 CP Women’s Open will help SickKids updated a Cardiac Operating Unit at the hospital. Additionally, a donation will be made to the Southlake Regional Health Centre.

Perhaps the most visible charitable portion of the tournament is the Birdies for Heart program. For each birdie made at the par-3 17th hole, CP will donate $5,000 to SickKids. Additionally, at Tuesday night’s Draw Party, the opportunity to play a pro-am round with CP Ambassador Brooke Henderson and Jessica Korda was auctioned off. The winning team purchased that opportunity for $45,000, with CP donating that amount, totaling $90,000 going to SickKids.