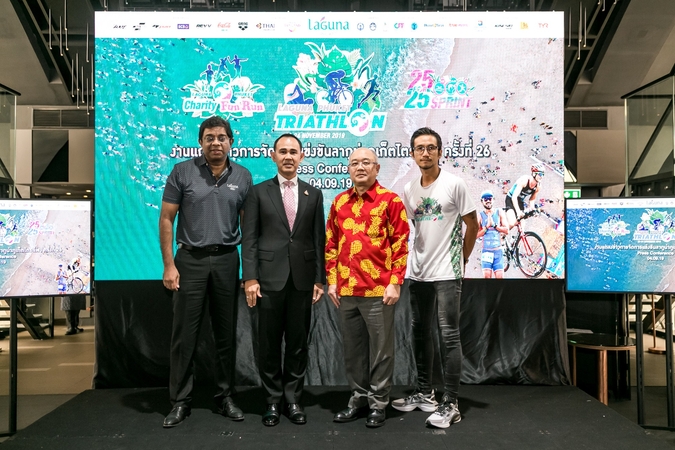 The 26th edition of Asia’s longest-standing triathlon race the Laguna Phuket Triathlon (LPT) is being held on the weekend of November 23-24, organisers announced at a press conference this week.

Comprising a race distance of 1.8K swim, 50K bike and 12K run through the scenic backdrop of Phuket province, world champions and pro triathletes from around the world will race against each other on the Sunday vying for a US$20,000 prize purse. LPT also features the “25 For 25 Sprint” short-distance category (0.5K swim, 18.5K bike and 6K run) which was launched last year in celebration of LPT’s 25th anniversary, and the “LPT Charity Fun Run” (2K Kids Run, 5K & 10K Charity Run) which will take place in the late afternoon of Saturday prior to the triathlon races on Sunday.

Last year’s sprint category saw a record-breaking number of participants, and raised more than Bt250,000 for Children First Fund (CFF) in support of more than 400 children at 7 orphanages in Phuket. The aim is to double its charitable causes this year by also supporting Kao Kon La Kao, Thailand’s largest charity run series, in support of hospitals nationwide.

“I’d like to thank all the runners and triathletes who have participated in our annual sporting events, and our partners and sponsors whose support have made Laguna Phuket Triathlon Asia’s longest-standing triathlon race," said Ravi Chandran, managing director of Laguna Phuket.

“We realise that LPT’s value lies not only in being an award-winning triathlon race, but also in its success as a significant platform to raise funds and awareness for meaningful charitable causes. I am therefore delighted to announce that, in addition to “Children First Fund”, we have added the Kao Kon La Kao Foundation as a charity partner this year. Every kilometre you run at LPT will become a Bt9 contribution to Kao,” he added.

“Laguna Phuket has been supporting Kao Kon La Kao since its first project in 2016. I am delighted that Kao Kon La Kao will be running in Phuket for the first time in October this year. Please join us in the last 10.8K at Laguna Phuket. Special thanks to Laguna Phuket for extending discounted hotel rates to Kao runners,” added rocker Atiwara “Toon Bodyslam” Kongmalai.

Thai celebrity and actress-turned-fitness-guru Anorma “Meiji” Cook hosted the “Triathlon Tips for Beginners” session and shared her experience training for the first Laguna Phuket Triathlon. The session was joined by world champion and triathlon legend from Germany, Jurgen Zack, who currently leads Z-Coaching triathlon training camp in Phuket and Sasitat “Boat” Kulsuptrakul, founder and owner of TriHub in Bangkok.

Registration for 26th Laguna Phuket Triathlon, 25 For 25 Sprint and LPT Charity Fun Run is available online at www.LagunaphuketTri.com through November 17. Hotels and resorts at Laguna Phuket are offering special rates for the race weekend.