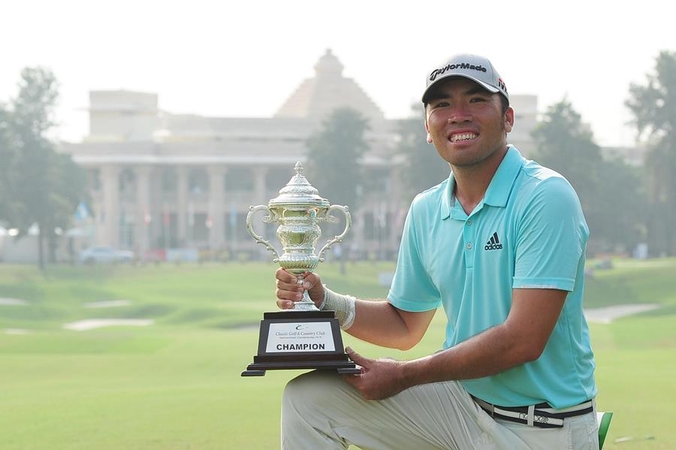 Gurgaon- Rory Hie became the first Indonesian to win on the Asian Tour after he carded a flawless four-under-par 68 to win the inaugural Classic Golf and Country Club International Championship by two shots on Sunday.

Hie, who has never lost the lead since the first round, was determined to seal his maiden win and demonstrated that resolve with an opening birdie on the first hole.

Despite playing under intense pressure from the chasing pack, the 31-year-old maintained his composure by marking his card with 11 straight pars before a hat-trick of birdies from the 13th hole confirmed his place in the winner’s circle.

"Oh my god, I’m finally an Asian Tour champion. There is a lot of great players that didn’t, or haven’t won yet and I don’t know what I did to deserve this. I’m just so glad that it happened," said Hie whose previous best Asian Tour finish came in the 2017 TAKE Solutions Masters in Bangalore where he finished tied-fourth.

"Coming down the stretch today I pretty much almost made every putt. Without Lawrie’s (Indonesia’s National Golf coach) help there is no way I can pull this off, there is absolutely no way. I was so nervous coming into today I was just shaking, even on the driving range. But somehow I re-focused and actually after I made the birdie on 15 I knew I had a two shot lead, and I found it really hard to control my emotions at that point," he added

Hie paid an emotional tribute to the late Arie Irwan, who passed away in April as he knew his close friend was watching over him when he signed off with a winning total of 21-under-par 267 at the Classic Golf and Country Club.

"I want to dedicate this win to Arie Irawan who passed away, I felt like we went though all the same struggles as a pro, and you know unfortunately he never made it. I’m sure he’s proud of me right now, we were really good friends," said Hie.

Korea’s Byungjun Kim tried to surmount a charge, going even a shot clear of Hie after making his fourth birdie of the day on the par-four 12th.

However, that birdie would be the last he was able to make as he closed out his last six holes with straight pars to finish in a share of second place with India’s Rashid Khan on 269 total.

Leading scores after round 4 of the Classic GCC International Championship being played at the par 72, 7114 Yards Classic Golf and Country Club course (am - denotes amateur):