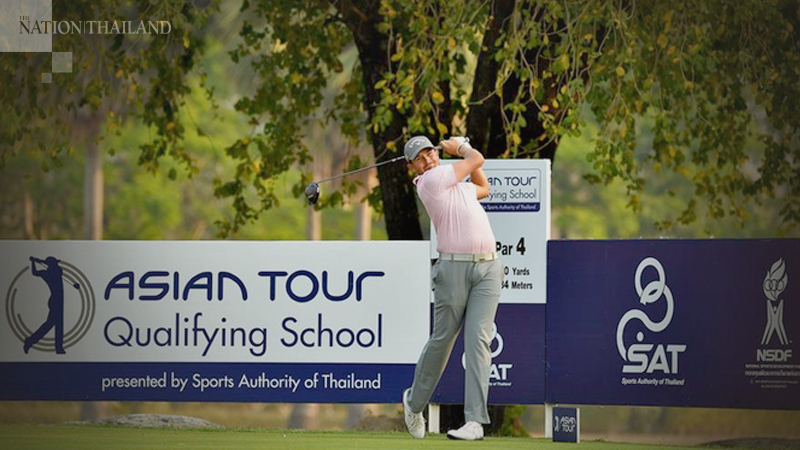 Hua Hin - Benjamin Follett-Smith kept up his chase for an Asian Tour card by signing for a three-under-par 68 on Course C&D to grab a share of the lead following the second round of the Asian Tour Qualifying School Final Stage on Thursday.

The 23-year-old Zimbabwean endured a tough stretch on the Sunshine Tour last year with 12 consecutive missed cuts but found the perfect place to reset at the Lake View Resort and Golf Club where he will be hoping to be third time lucky in his Tour card chase on the Asian Tour.

Follett-Smith, who partnered fellow compatriot and Asian Tour member Scott Vincent at the 2018 World Cup of Golf in Melbourne, claimed his first title on the Sunshine Tour at the Capetown Open last February and was the Tour’s Rookie of the Year in 2018.

Former Asian Tour member Kemmer is attempting to regain his card after a three-year lapse at the Qualifying School, where he had previously enjoyed success with runner-up finishes in 2012 and 2016.

The 32-year-old American marked the best efforts of the day on Course C&D with a bogey-free round highlighted by five birdies and an eagle on the par-five 15th, where he coolly rolled in a seven-foot putt.

Overnight co-leader Toshiumi Kushioka of Japan, who progressed from Section A of the First Stage last month, maintained his fine form to retain his one-shot advantage in his first attempt at the 90-hole battle which was held across courses A&B and C&B.

The 2020 Asian Tour Qualifying School, which comprises of two stages – First Stage and Final stage, attracted a total of 458 entries from 37 countries across the globe.

The 36-hole cut was set at two-over-par 144 with a total of 146 players, who finished inside top 140 and ties, progressing into the next two rounds.

Made a three-putt today unfortunately but otherwise, it was a good round. It was nice to finish with two birdies in the last three holes on Course C&D, which were the toughest out there. It was very difficult with the wind but I managed to hit it to a good spot for birdies on 16 and 18.

Happy to be in a good position for the remaining rounds. It’s going to be the same thing. I’m just going to focus on getting my head together and keep my mind in the game, not elsewhere.

Scott (Vincent) and I grew up together and I have heard a lot of good things from him about the Asian Tour. I have been trying to get on the Asian Tour for three times now. It's my third time so I hope to be third time lucky!

Scott’s like a mentor to me. I aspire to be where he is and obviously if I can get to where he is, he's going to get pushed harder and I'm going to push myself harder so yeah, it would be really nice to be able to play on the Asian Tour.

I haven’t had a good season last year so I think the key for me is staying positive now. I had too high expectations after my first season and that didn’t turn out well for me. I had to back off and realise that I shouldn’t trying to make birdie on every hole and get disappointed when I don't.

It was nice and calm for the first seven holes and I made a couple of good two putts to start the round. I wasn't hitting it fantastic until I made an eagle on 15. I took it way left over all the trees, which was kind of aggressive. But I got lucky and I pitched it to like six or seven feet past the hole and made the putt.

My putting was a lot better. I didn't putt bad yesterday but felt like I missed everything. Then today, I changed my grip a little bit and didn't really miss.

I like playing on the Asian Tour so I hope it works out this week now that I am going to get another chance at it. I played a bit in Japan and I like it a lot. It's really fun with great courses and great spectators and I would like to play both Tours.

I will just try and do the same things, stay hydrated and rested and hopefully I can continue the good run.

The first nine holes today were tough. It was windy when we started but I managed to make a couple of up and downs. It was calmer heading into the back nine and I gave myself a lot of birdies opportunities which I was able to convert as well.

I made a long putt from about seven metres on my last hole today. It was a nice way to finish the round. I think distance control is key to play well on these courses. I hope to continue this good form for the next three rounds.

I just want to play every round like it’s the first time I’m playing it. Tee shots will be the key to score to out there.

Scores after round 2 of the The Asian Tour Qualifying School Final Stage 2020 being played at the par 71, A&B course and C&D course (am - denotes amateur):