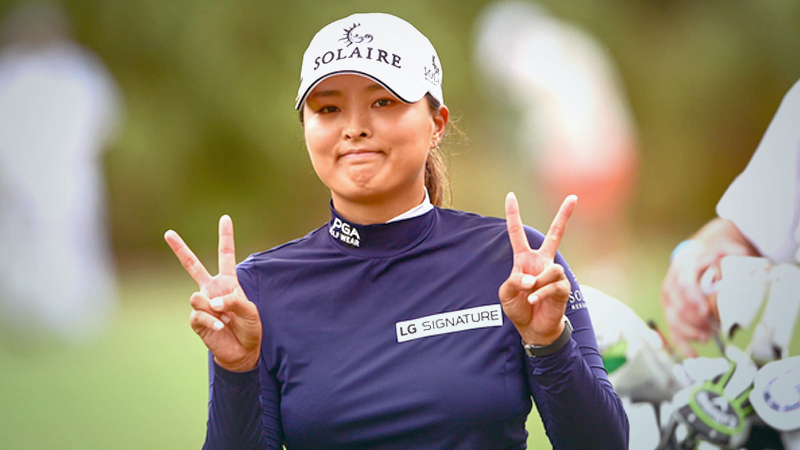 After starting the 2021 season at the Diamond Resorts Tournament of Champions, the LPGA Tour returns with the second playing of the Gainbridge LPGA at Lake Nona Golf & Country Club. Lake Nona is set to host 120 players, as the Tour returns to Nona for the first time since the inaugural Solheim Cup in 1990.

In her first official event since retiring in 2008, Annika Sorenstam will tee it up at the Gainbridge LPGA in her own backyard. Sorenstam, who lives within the Lake Nona community, last competed at the

the 2008 ADT Championship before retiring to start a family and expand her business opportunities.

Defending champion Madelene Sagstrom is back at the event where she captured her maiden Tour victory and became the first of three Rolex First-Time Winners of 2020. Sagstrom held the 54-hole lead for the first time in her Tour career but was tied with Nasa Hataoka as they stepped to the 17th tee in the final pairing. The Swede went on to drain a must-make par putt on the final hole and earned the one-stroke victory over Hataoka.

Sagstrom is joined in the field by six of the top seven in the Rolex Women’s World Golf Rankings, including World No. 1 Jin Young Ko and No. 2 Sei Young Kim, who are playing their first event of the season.

WHAT YOU NEED TO KNOW ABOUT THE GAINBRIDGE LPGA

This past December, Jin Young Ko did the unthinkable. After securing her place in the Tour’s season-ending CME Group Tour Championship with a tie for second at the U.S. Women’s Open the week before, Ko went on to win her seventh Tour title and the $1.1 million winner’s check, winning the 2020 Official Money Title in just four starts. Ko said she didn’t know if she considered her reflection of the win that much of a celebration.

“I can't remember, but I think I did,” laughed Ko, who also said friend and fellow Tour player Mi Jung Hur hosted her to a dinner after the victory. Eventually, Ko spent some time in her native Korea before venturing back to the U.S. to get ready for her first 2021 start. “I had great time my life with my friends and with new coaches. So I had a lot of practice and a lot of resting time during the off-season, so I'm happy to here.”

Ko enters the season at World No. 1 in the Rolex Rankings, a position she has held since her win at the 2019 Amundi Evian Championship. As much as keeping that ranking may weigh on her mind, it’s her goal to never let it get to her on the course.

“It's a little pressure for me because I have to play well on the course every week, every day, every hole. But I don't want to be 100% perfect on the course. Just I am human, so I can make mistakes, so I have to accept about that,” said Ko. “So I am learning from the golf a lot of things, so on I want to get better and better day by day. I'm fine.”

2020, while such a strange year in so many aspects, was a competitive year to remember for Sei Young Kim. She captured her first major title at the KPMG Women’s PGA Championship, added a second victory at the Pelican Women’s Championship and earned Rolex Player of the Year honors for the first time. So after a year of off-course hardship and on-course success, no one can blame the 28-year-old for enjoying some hard-earned time off.

“I had a lot of fun during the off-season because I didn't touch the golf club. I just enjoyed time and spend time with friends and then get to see them,” said Kim, who spent nearly two months back home in the Republic of Korea before returning to the United States last week. “And I did a lot of things, like pilates, yoga. Yeah, it was fun.”

Now sitting second in the Rolex Women’s World Golf Rankings, Kim comes to Lake Nona Golf & Country Club refreshed and ready to take a hopefully more normal season. With LPGA Tour legend Annika Sorenstam in this week’s field, Kim would relish the opportunity to play alongside one of her ultimate golf icons.

“I was so excited to have the change to pair with her,” said Kim. “Very low percentage, but hopefully. If I can, I want to play with her because she's my idol when I was young. When I played the hole 14 or 13, someone told me like that house is Annika’s house. I was like, Wow, that's huge!”

With 12 career LPGA Tour victories, Kim still needs 60 wins to match Sorenstam’s mark of 72. But Kim’s goal for 2021? It would move her firmly in the right direction.

“I want to win three times in this year. Then the season is very long, so I want to just enjoy with my group and all the players,” said Kim with her trademark bright smile. “So it's hopefully, yeah, fun all year, and then, if I reach the goal, it's going to be another happy.”

In her first LPGA event since finishing in a tie for fifth at the 2020 CME Group Tour Championship, 15-time LPGA Tour winner Lydia Ko is looking forward to playing this week’s Gainbridge LPGA at Lake Nona Golf & Country Club in Orlando, Fla., right in her own backyard.

“Obviously extra excited to play at a golf course that I play at for the majority of my off-weeks and off-season. I was kind of surprised when I heard the tournament was coming here,” said Ko, who has lived in Florida for seven years. “When I heard it was at Nona I wasn't sure if this tournament was going to be on any schedule, but being here at the course I pretty much live and practice at, I knew it was kind of a no-brainer for me to play.”

Getting to play at her home course doesn’t mean Ko won’t be faced with any surprises. One of the best came this past Saturday, as Ko teed it up alongside LPGA and World Golf Hall of Fame member Annika Sorenstam, who is playing in her first official event since 2008 this week.

“I was like, ‘Yeah, I'll play with Haley (Moore),’” reported Ko, who didn’t know she was about to enter a practice round with the legend. The foursome ended up being Ko, Sorenstam, Lindy Duncan and Haley Moore. “I think all four of us played pretty well. We ended up winning by a really small margin on the back. Overall, Annika and Lindy won, but at least we could say we got credit to say we won the back nine.”

Ko, considered one of the finest players of her generation, has nothing but admiration for Sorenstam, who retired when Ko was just 11 years old.

“I think she is the GOAT, so it's pretty cool that I get to play in the same field as her,” said Ko. “I got to play my first-ever round with her on Saturday here, and that was super exciting. I was like, Man, this is borderline line very nerve wracking.”

MADELENE SAGSTROM’S #DRIVEON STORY: “NONE OF US ARE ALONE”

I’m sitting in a hotel room in Greenwood, South Carolina. And I can’t stop crying.

It’s March 2016 and I’m here to prepare for a Symetra Tour event later in the season.

I want to give myself the best chance to succeed. But I can’t keep this inside of me anymore. I need to tell someone about the secret that I’ve kept bottled up inside of me for 16 years...

Growing up in Sweden, I was so naïve. I thought I could trust everybody. I thought everybody was supposed to be my friend. I hung around a lot with my brother when we were kids and many of our close friends were older people who lived near us in the countryside about an hour from Stockholm.

One day, I was by myself going over to see my friend, a man I was really close to but who was not a relative.

I went inside. We hung out. And he sexually abused me.

Afterward, I went home. And for 16 years, I acted like nothing ever happened.

For years, I immersed myself in golf. Golf became my savior; I could lose myself in the game. And when I played well, I was okay.

What I didn’t realize is that I simply did not like who I was. I felt insecure – never thinking that I was worthy enough or good enough. I didn’t like who I saw in the mirror. I couldn’t even put body lotion on my legs because of how much I hated my body, hated myself, all because of what someone else did to me.

I never wanted to acknowledge the assault, to myself or anyone else. Even after I became an adult and could understand that what happened to me was not my fault – that the feelings I had about myself were rooted in the trauma from long ago – it didn’t help. Somehow, I thought I’d be okay not talking about it.