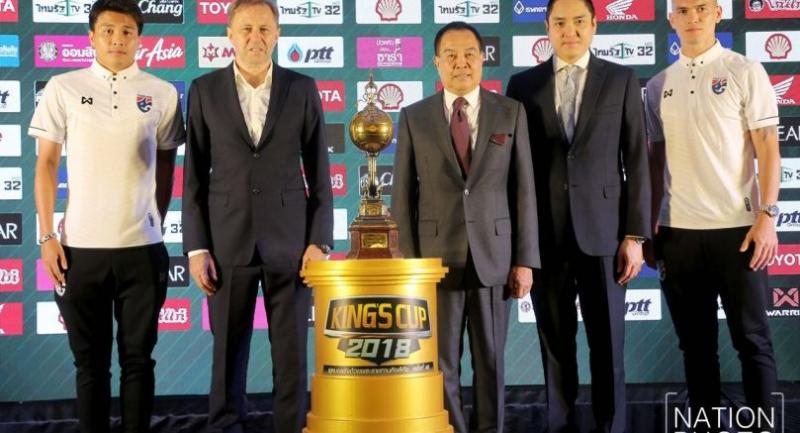 Milovan Rajevac, 2nd from left in a photo session along with Thai football chief Somyot Poompanmoung, middle, and national players.

A daunting task awaits two-time defending champion Thailand in the 46th King’s Cup football tournament as they face star-studded Gabon in their opening game on March 22 at the Rajamangala National Stadium.

Thailand will play the South African world No 95 at 7.30pm on March 22 for a final spot against either Slovak Republic or UAE who will play earlier at 4.30pm in the friendly tournament. The final is due on March 25 at 7.30pm while the losing teams in the first round will fight for the third place at 4.30pm.

While Thai football chief Somyot Poompanmoung vowed to bring happiness to The Thai fans' faces with a third successive victory for the national team, national coach Milovan Rajevac appeared to be more realistic about Thai chances of retaining the Cup.

“Gabon have improved a lot in recent years. They have experienced coach and players who are playing in big clubs in Europe. With the quality of the team, I think this is an excellent challenge for us,” the Serbian coach said during the press conference at SC Park Hotel.

Rajevac who is in his second year as the national team coach is more concerned with the experience his players will reap from the event which also awards world ranking points.

“As this is the first event of the year for the team, it’s a good preparation for the Asian Cup and AFF Championship. We will prepare our team as much as possible as we know Thai people are very passionate about the King’s Cup. We will fight hard and make them proud,” Rajevac said. In terms of the Thai squad, all four key men:  Kawin Thamasatchanan who is playing for Oh-Leuven as well as Chanatip Songkrasin, Teerasil Dangda and Teerathon Bunmathan who are playing in J-League clubs, will come back to represent Thailand in the tournament.