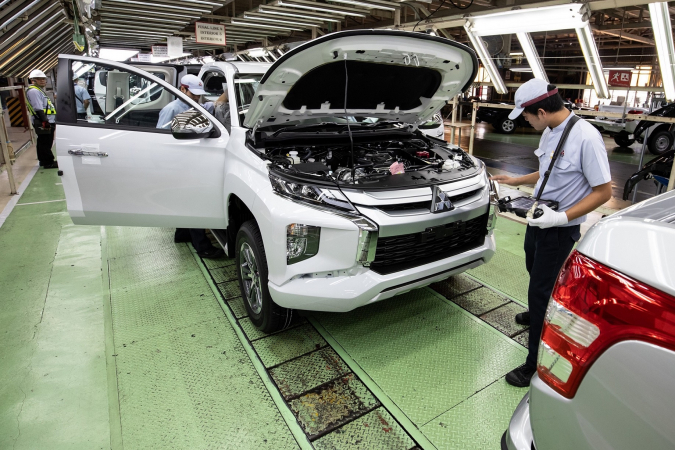 Mitsubishi roars ahead after hitting series of major road bumps

After years of turmoil, Mitsubishi is firmly on the road again and is likely to maintain its No 4 position in the Thai automobile market when 2020 dawns.

The Japanese automaker, which suffered heavy decline for several years and was overtaken by smaller brands like Mazda, unleashed a strong performance during the first six months of this year.
Sales rocketed by 10.3 per cent to 45,343 units, the company said in a statement on Tuesday. In comparison, the total market grew by 7.1 per cent at 523,770 units.
Mitsubishi is currently ranked No 4 in Thai auto sales standings – after Toyota (171,502 units), Isuzu (89,177 units) and Honda (64,699 units). It roared past Nissan (34,577 units) by more than 10,000 units, while Mazda (31,931 units) has dropped to No 6 after sales plunged by 24.3 per cent as customers wait for new models such as the next-generation Mazda3 to be launched later this year.
Mitsubishi’s performance has been aided by increasing popularity of its Triton pickup, which accounts for 40 per cent of total Mitsubishi sales in the kingdom. Other models in its line-up include the Mirage and Attrage eco-cars (26 per cent), the Xpander MPV (19 per cent) and the Pajero Sport PPV (15 per cent).
The company had also just celebrated its 4-million-unit export milestone from Thailand last month.
This year Mitsubishi exported a combined total of 177,715 CBU (completely built up) and CKD (completely knocked down) vehicles.
Mitsubishi Motors (Thailand) president and CEO Morikazu Chokki said the outstanding first-half performance was a result of the company’s improved vehicle lineup and network expansion.
The automaker will enhance its line-up in the second half of 2019 to cater efficiently to different customer groups. It recently launched special versions of the Triton as well as the redesigned Pajero Sport, and more will come during the remaining months of 2019.
Apart from its dealer network expansion, a new corporate identity and design will be introduced in more than 65 outlets this year, with the target of upgrading all 240 outlets in the country by 2021.
Mitsubishi will also introduce the M-Drive mobile application, developed to help drivers take care of their vehicles via a fast, accurate and connected platform. It features real-time updates on vehicle status and information on smartphones running Google Android and Apple iOS.