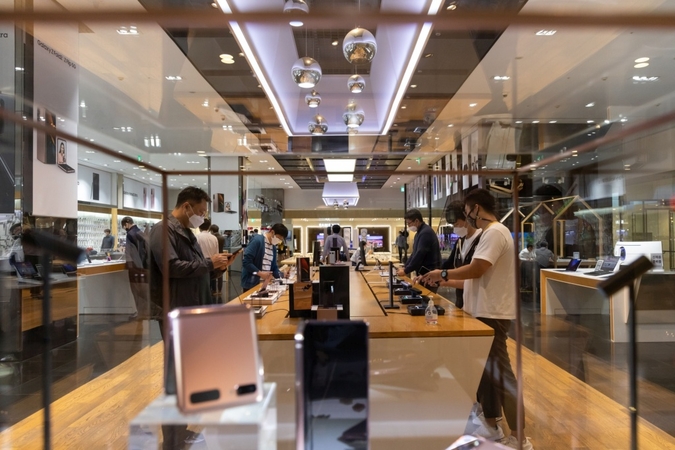 Samsung Electronics Co. shares rose 7.1% to a record high in Seoul Friday amid signs of a rebound in the memory-chip market and off the back of a surge in earnings.

South Korea's biggest company posted a 26% increase in operating income to 9 trillion won ($8.3 billion) for the three months ended December in preliminary results. That compares with a 9.52 trillion won average of analyst forecasts. Sales for the quarter were 61 trillion won. The company didn't provide net income or break out divisional performance, which it will report later this month when it releases final results.

Hours earlier, fellow memory chipmaker Micron Technology issued a bullish forecast, predicting that the need for dynamic random access memory will likely exceed supply this quarter. The tightness of supply in DRAM is already driving up prices, according to Chief Executive Officer Sanjay Mehrotra. His company and Samsung are two of the largest players in a resurgent market that's set to expand through increased usage in the automotive sector and more advanced, resource-intensive applications like artificial intelligence.

"We believe memory pricing recovery will take place not only for DRAM but also for NAND" this year, Citi analysts wrote in response to Samsung's results, citing limited supply growth, low inventories and tight capacity.

Galaxy smartphone sales were weaker over the past quarter as Apple released its first 5G-compatible iPhones and Chinese rivals launched aggressive campaigns to secure the market share vacated by Huawei Technologies Co.'s sanction-stricken consumer business. Samsung shipped 41 million 5G devices in the past year, according to Strategy Analytics estimates, lagging behind Apple's 52 million and Huawei's 80 million sold largely at home in China.

The Suwon-based company plans to unveil its next flagship series, the Galaxy S21, earlier than its usual annual schedule with a Jan. 14 online event. Competitors like Xiaomi Corp., Oppo and Vivo are aggressively positioning themselves to fill the void expected to be left by Huawei in international markets.

Memory chip prices fell in the fourth quarter owing to a slowdown in server demand, while a stronger Korean won during the period also eroded Samsung's earnings.

"Samsung's OP was affected by the currency issue and costs for a new fab," said M.S. Hwang, analyst at Samsung Securities. "The strong earnings and outlook of Micron indicates Samsung's earnings might have not been too bad. The chip market is on track to recover."