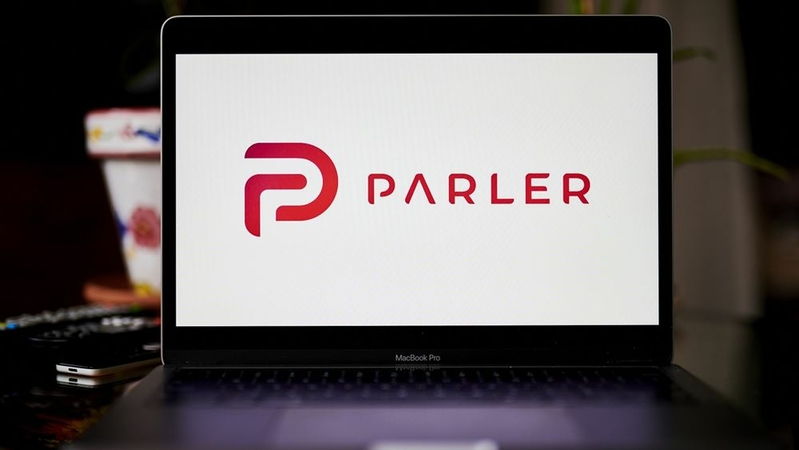 As Facebook Inc. and Twitter Inc. banished users and groups supporting the violent mobs at the U.S. Capitol last week -- including President Donald Trump himself -- downloads surged for a less restrictive social media app called Parler. But in an effort to prevent further riot organizing, Google Inc. and Apple Inc. booted Parler from their app stores, and Amazon.com Inc. shut off its web services.

"We will not cave to pressure from anti-competitive actors!" John Matze, Parler Inc.'s chief executive officer, said on his site Friday. "We WON'T cave to politically motivated companies and those authoritarians who hate free speech!"

In reality, Matze doesn't have much choice. His free-speech-centric network, where some extremists turned to rally insurgents and organize future uprisings, was deemed an "ongoing and urgent public safety threat" by Google. Apple quickly rejected as insufficient a Parler plan to moderate its content. Amazon employees asked that the web giant "deny Parler services until it removes posts inciting violence, including at the Presidential inauguration."

Access to the website appeared to be cut off after midnight Sunday in California when Amazon shut down access to its servers. With an internet ecosystem dominated by a few big players, the app has little chance of survival without access to these mainstream channels.

The Parler restrictions underscore how technology companies have increasingly been held accountable for the potential consequences of what happens on their services, where they have greater visibility than governments do -- and the ability to take quicker action. For years, large tech companies avoided such debates by claiming to be content-neutral. Meddling and misinformation campaigns in the 2016 presidential election made it clear that these companies, and their software algorithms and content moderation, had real-world impact.

Now, pressured by lawmakers, civil rights advocates and even their own workers, the big tech companies are realizing just how much power and responsibility they have over public conversation -- including over apps they didn't create.

Such monopoly-like powers are already under scrutiny by U.S. regulators, with Google and Facebook battling government antitrust lawsuits. At the same time, the companies have come under fire for their lackadaisical practices on content moderation, when being too permissive on incendiary speech can lead to real-world violence or illegal activity.

The tech companies' moves were mostly applauded by government officials and critics, and many openly asked why it took so long to crack down. But their subjective nature worried some advocates.

"It should concern everyone when companies like Facebook and Twitter wield the unchecked power to remove people from platforms that have become indispensable for the speech of billions -- especially when political realities make those decisions easier," Kate Ruane, senior legislative counsel at the American Civil Liberties Union, said in a statement after Trump was banned on the platforms. "It is our hope that these companies will apply their rules transparently to everyone."

Parler already faced major hurdles. The company is seeking to take on much larger services with established user bases, including Twitter, Facebook and Instagram. The Henderson, Nevada-based upstart network gained some traction in 2020 as it capitalized on fears of anti-conservative bias by the main platforms, and it worked. Backed by Trump supporter Rebekah Mercer, the daughter of hedge fund investor Robert Mercer, Parler was the top program on Apple's App store Saturday before it was banned, with millions of total downloads. The app functions similarly to Twitter, where users post short messages in a feed where others can follow and interact.

As Twitter and Facebook became increasingly willing to label or fact-check Trump's content in recent months, some Republican lawmakers and media figures, like South Dakota Gov. Kristi Noem, R, and conservative radio personality Mark Levin, encouraged supporters to follow them on Parler. Yet because of its narrower focus on right-wing users seeking more freedom from the big tech company's rules, some Parler users complained that it felt like an echo chamber of like-minded people rather than a place to engage in the debate -- or conflict -- that has become a hallmark of Twitter's service. Trump himself doesn't have a Parler account.

While Facebook and Twitter have stricter content policies, those networks were also found to have hosted users planning the mob violence at the Capitol, including those who directed large followings to shift over to Parler. When it permanently axed Trump's account, Twitter said it saw evidence of new riots planned for Jan. 17, while Facebook said it has taken down 600 militarized social groups so far and was banning posts from those saying they planned to take weapons to government buildings.

The platforms' artificial intelligence has been improving at catching offending posts, in some cases before they are seen by a significant number of users. Even if the mainstream apps didn't aggressively take down such content, the overwhelming volume of posts and users also probably means they'd be unlikely to face Parler-level scrutiny from app stores.

"Perfect moderation is impossible but there's a difference between trying and not trying," wrote Benedict Evans, an independent technology analyst and former partner at venture capital firm Andreessen Horowitz, on Twitter. "And these problems are independent of business model -- they apply to every network and model."

Parler CEO Matze encouraged users to find workarounds, like using the website on a browser or installing the app on Android phones through online stores besides Google Play. He also told them to cancel their Amazon subscriptions, dump Apple, and to "call, write and email your congressman and senators and expose this anti-competitive behavior."

On Sunday, after the crackdown on his app, Matze issued a statement to clarify his earlier comments.

"In an interview this week, some believe I gave the impression that I somehow did not care whether Parler is used to incite violence. I want to set the record straight: That interpretation could not be further from the truth," he said. "We do not condone or accept violence on our platform and we never will."

He said Parler's community guidelines expressly prohibit threats of violence or incitement, and the company has been working to enforce the rules.

Even as its technological backbone is disabled by the tech giants, Parler may continue to exist on a smaller scale. Google restricted Gab, another "free speech"-branded site popular with right-wing extremists, in 2017 for violating its hate speech policy. In 2018, Gab was banned by domain provider GoDaddy.com and PayPal after an anti-Semitic user shot 11 people at a Pittsburgh synagogue. Since the Capitol insurrection, Gab has been tweeting about such bans as a badge of honor, and noting that it's seen a surge in users and job applications, necessitating new servers to keep the site running. "The paradigm shift to new platforms that support free speech will happen overnight," Gab's account tweeted. To Parler's Matze, Gab said, "Best of luck, sincerely."