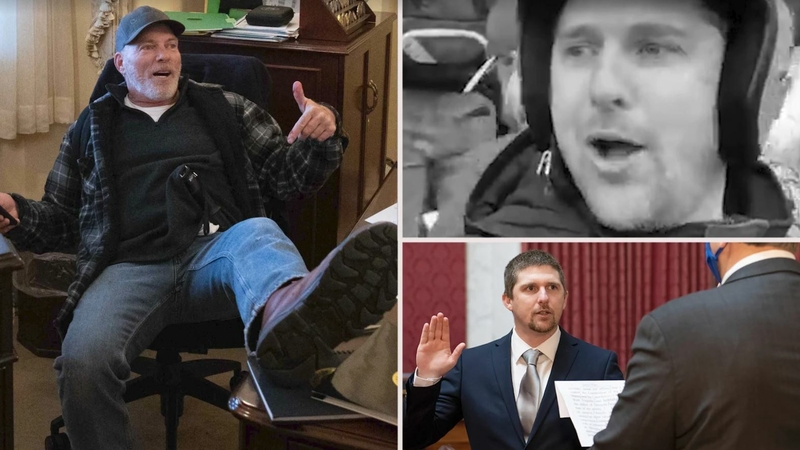 WASHINGTON - Tinder, Bumble and other dating apps are using images captured from inside the Capitol siege and other evidence to identify and ban rioters' accounts, causing immediate consequences for those who participated as police move toward making hundreds of arrests.

Women and men have in some cases also turned the dating apps into hunting grounds, striking up conversations with rioters, gathering potentially incriminating photos or confessions, then relaying them to the FBI. Using the dating apps to pursue members of the mob has become a viral pursuit, with tips shared on Twitter and some women changing their location on the dating apps to Washington, D.C. in hopes of snaring a potential suspect.

The moves cast a spotlight on how some unlikely sources have helped expand a digital dragnet for participants in a siege with deeply online roots, fueled by viral conspiracy theories, organized on social media and live-streamed in real-time.

They also show how people are attempting to use the same tools to fight back, including by contributing to a wide-scale manhunt for dating-app users who played a part in the violent attack.

Amanda Spataro, a 25-year-old logistics coordinator in Tampa, called it her "civic duty" to swipe through dating apps for men who'd posted incriminating pictures of themselves. On Bumble, she found one man with a picture that seemed likely to have come from the insurrection; his response to a prompt about his "perfect first date" was: "Storming the Capitol."

"Most people, you think if you're going to commit a crime, you're not going to brag about it," Spataro said in an interview.

After swiping right in hopes she could get more information out of him, she said he responded that he did visit the Capitol and sent more pictures as proof. She later contacted the FBI tip line.

Some onlookers have celebrated the viral hunt as a creative form of digital comeuppance. But some privacy advocates said the episode reveals a worrying truth about pervasive public surveillance and the opaque connections between private companies and law enforcement. Some also worry about people being misidentified by amateur investigators and other risks that can arise when vigilantes try to take crime-fighting into their own hands.

"These people deserve the right to seek a partner in one of the few ways we have to socialize during the pandemic, and seek love," said Liz O'Sullivan, technology director of the Surveillance Technology Oversight Project, a New York-based nonprofit group fighting discriminatory surveillance.

"It's one more example of how these tech companies can impact our lives without our feedback," she added. "What if this was happening to Black Lives Matters protesters? . . . At the end of the day, it's just so much power."

Both Bumble and Match Group - which also owns Tinder, Hinge, OkCupid, PlentyofFish and Match - said they were working to remove users known to be involved in the Capitol siege from their platforms.

"We always encourage our community to block and report anyone who is acting against our guidelines, and we have already banned users who have used our platform to spread insurrectionist content or who have attempted to organize and incite terrorism," Bumble said in an unsigned statement. "As always, if someone has or is in the process of committing a potentially criminal act on our platform, we will take the appropriate steps with law enforcement."

A Bumble official, speaking on the condition of anonymity because company officials have received violent threats following past policy changes, said app employees have reviewed images taken inside and around the Capitol during the siege and banned accounts that "spread insurrectionist content or who have attempted to organize and incite terrorism."

Bumble uses software to scan users' dating profiles and biographies for "text content that promotes the insurrection or related activities," the official said. Accounts can be banned for promoting racism, encouraging violence or spreading falsehoods about Trump's election loss.

Dating apps have also worked to ban anyone who has been arrested or publicly identified by law enforcement as having taken part in the attack.

Match Group said it has banned rioters' accounts based on long-established rules against promoting or inciting violence. Match spokeswoman Vidhya Murugesan declined to say how many had been punished in this way.

"We have, and will continue, to ban any users wanted by the FBI in connection with domestic terrorism from all of our brands, and we always cooperate with law enforcement in their investigations," Murugesan said.

Many women in Washington over the past two weeks had taken notice of a surge in conservative men on dating apps, many wearing "Make America Great Again" hats or other markers of support for President Donald Trump rarely seen in an overwhelmingly Democratic city.

The FBI has set up an anonymous tip line for reports on people who might have breached the Capitol. In a statement last week, the bureau said they'd received more than 100,000 "digital media tips" from a wide range of sources.

Law enforcement officials would not say how many tips came from dating apps but have said they are reviewing all evidence. More than 100 people have been charged in connection to the riots, and hundreds of other cases are still under investigation.

"Even your friends and family are tipping us off," FBI Assistant Director in Charge Steven M. D'Antuono said at a recent press briefing. "So you might want to consider turning yourself in instead of wondering when we're going to come knocking on your door. Because we will."

The overlapping issues of law enforcement, privacy and user safety are complicated for dating apps. Police or prosecutors seeking data - especially if they have search warrants - give companies little room to object unless they are already encrypting data in ways that can't be readily retrieved, as Apple and some other companies have done with some kinds of user communications.

Using publicly available data to purge users who may have been involved in a crime - especially one as visible and troubling as the Capitol attack - requires tougher trade-offs.

Some would argue it's unfair to delete the account of someone merely on the grounds of the Capitol that day, as opposed to someone known to have entered the building or committed other crimes, such as vandalism and theft. But a dating app's users may reasonably expect to not get connected to somebody known to participate in what many regard as an illegal insurrection designed to disrupt a democratic process.

At the same time, the available identification technologies are imperfect. Privacy experts question whether any company should be taking action against users merely because they are believed to have been at the Capitol on Jan. 6 - before formal adjudication or even arrests by authorities.

"There's a likely challenge of both false positives and false negatives," said Ashkan Soltani, distinguished fellow at Georgetown Law Center's Institute for Technology Law & Policy. "I'm not sure a dating app should be in the business of trying to make these determinations."

Soltani said that the issues facing the dating apps are difficult ones, with a range of possible solutions. The apps could alert individual users that a person they have expressed interest in may have participated in the Capitol takeover, or they could allow individual users to identify themselves as participants by hitting a built-in button, similar to the "I Voted" tag some social media companies offer on election days. Blocking users outright based on analysis of images, especially before arrest or adjudication, struck him as "over-moderation" by the apps.

Dating apps have a history of using human moderators and automated software to scan for problematic content, thanks in large part to male users with a habit of sending unwanted photos of their genitals. (Such accounts are immediately banned.)

A Bumble spokesman said the dating app also scans users' profile photos and biographies for weapons, hate symbols or offensive language. Conversations between matched users are not moderated unless one of the users reports the chat for abuse.

Algorithms scan images and video to see whether they match any clips in databases of problematic content, such as child sexual abuse material or child pornography; they also look through user profiles or posts to analyze whether they include hate speech, threatening language or racial slurs.

As the digital hunt for Capitol siege suspects was underway, Bumble on Wednesday removed a feature in the U.S. that allowedpeople to filter prospective matches by their political leanings, saying in a statement that the filter had been used "in a manner contrary to our terms and conditions."

Some amateur insurrectionist-hunters criticized the company for instituting a change they said only protected rioters. But Bumble said the filter could have been misused to target people, including those who self-identified as "conservative" but did not participate in the siege. Bumble has since restored the politics filter after implementing what it called new "moderation tools and protocols."

The move could dim the romantic opportunities for people like Brandon Fellows, who posted Snapchat videos of himself as he wandered the Capitol and smoked a joint in a senator's office.

He later told Bloomberg that his Bumble profile was "blowing up" after he posted his Capitol photos, but did not provide evidence. The company said his account was immediately banned.