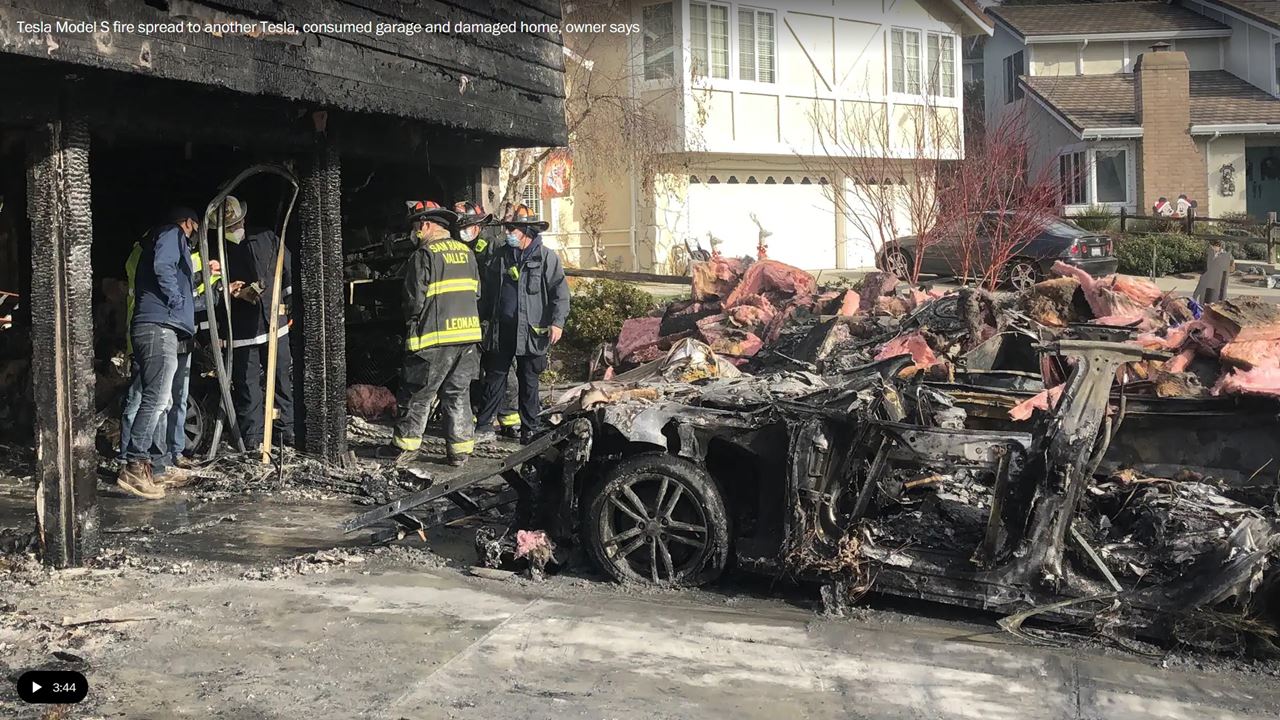 While they were asleep, their Teslas burned in the garage. It is a risk many automakers are taking seriously.

Twelve minutes after that, they awoke to a blaring car alarm and a fire consuming their house in San Ramon, Calif. The blaze had started in one of the two electric vehicles in their garage and spread to the other.

"If we had lived upstairs in this house, we'd be dead," said Yogi Vindum, a retired mechanical engineer.

The fire, which has not previously been reported on in the news media, is one in a string of recent examples showing what can happen when electric cars are left parked in garages to charge overnight. The issue is causing mounting concern as a number of electric-vehicle makers have warned owners not to leave the cars charging unattended in certain circumstances, or sitting fully charged in garages.

Automakers including General Motors, Audi and Hyundai have recalled electric vehicles over fire risks in recent years and have warned of the associated dangers.

Chevrolet last year advised owners not to charge their vehicles overnight or keep their fully charged vehicles in garages. It recalled more than 60,000 of its Bolt electric vehicles over concerns about the cars spontaneously combusting while parked with full batteries or charging, after reports of five fires without prior impact damage. The company issued another recall last month covering the same vehicles after two reports of battery fires in repaired vehicles.

"We don't think every vehicle has this rare manufacturing defect," General Motors spokesman Dan Flores said. "But we can't take a chance, so we're recalling all the vehicles."

Automakers face numerous challenges as they race to get electric vehicles to consumers ahead of regulatory and company deadlines for shifting production away from gas-powered vehicles. They face skepticism about the availability of charging stations, concerns about vehicle range and apprehensions over cost. Fires have drawn attention because of the high-profile recalls and blazes that followed product rollouts, analysts say, further complicating the automakers' calculations.

Tesla in the past has argued that its cars are 10 times less likely to catch fire than gas-powered vehicles, drawing on data from the National Fire Protection Association and U.S. Federal Highway Administration.

Still, safety experts note that the fires can burn more intensely and last much longer.

"Battery fires can take up to 24 hours to extinguish," Tesla's website says in an emergency response guide for the Model S. "Consider allowing the battery to burn while protecting exposures."

Tesla owners have reported numerous fires involving older-model vehicles, though not all under the same circumstances. The Washington Post has documented at least five fires involving the Model S, including the blaze on Dec. 30, 2020, that destroyed much of the Vindums' home in San Ramon. In that case, Yogi Vindum recalled, at least six firetrucks came to the home.

Also late last year, flames started shooting out of a five-year-old Tesla Model S in Frisco, Texas, and firefighters struggled to gain access to the cabin after the motorized doors failed to open. Tesla said in 2019 that it had sent investigators to the site of an explosion involving a Model S in a Shanghai car park. Surveillance video showed smoke billowing from the parked car before a fiery blast. In 2018, a Tesla Model S caught fire "out of the blue" on a Los Angeles street, said actress Mary McCormack, whose husband owned the vehicle. Tesla acknowledged that the flames came from the battery.

In late June, a new, top-of-the-line Tesla Model S "Plaid" was destroyed when it erupted in flames shortly after the owner took delivery of the vehicle.

Meanwhile, the National Highway Traffic Safety Administration has been investigating Tesla's battery management system since 2019. The agency said Tuesday it does not comment on open investigations.

Tesla had come under scrutiny over concerns it allegedly manipulated battery software in older vehicles to lessen the risk of fire. The company has proposed a settlement over the issue, and Elon Musk tweeted late last month: "If we are wrong, we are wrong. In this case, we were."

NHTSA opened an investigation into Chevrolet Bolt fires in October 2020, before the initial recall of that vehicle.

Battery-powered vehicles have not been shown to catch fire at rates higher than gasoline cars, but when fires do erupt, they burn longer and hotter, propelled by lithium-ion batteries that supercharge the blazes, experts say. Including gas-powered cars, the National Fire Protection Association says there were 189,500 overall highway vehicle fires in the United States in 2019, encompassing passenger and other types of road vehicles.

The case involving the Vindums' cars is unique because it involved two electric vehicles parked next to each other in a garage, demonstrating the explosive force they can unleash when burning.

A fire inspection report obtained by the Vindums in July cited the Tesla Model S's thermal management system as one of two possible causes of the fire, the other being a fault in the car's electrical system as it was charging.

Tesla did not respond to a request for comment on the specifics of the Vindums' case, including a short narrative of the events and the Vindums' view of Tesla's response to the fire.

Yogi Vindum, who described himself as a fan of Tesla's, missed the initial alert to his iPhone at 5:25 a.m. In the garage, where the 2013 Tesla Model S 85 had been charging overnight, flames broke out and began spreading rapidly. The other Tesla Model S was parked next to it. The garage erupted in flames, with violent explosions powerful enough to blow off the metal garage doors, they said.

A blaring car alarm woke them up. The house was filling with smoke and alarms were going off as they escaped, he said.

From across the street, the Vindums watched as their home went up in flames. Footage from a nearby doorbell camera includes audible explosions.

The Vindums have not been able to live in their home since the Dec. 30 fire, which led to more than $1 million worth of damage, according to a report from the San Ramon Valley Fire Protection District, which was viewed by The Post.

"The firemen said it was so hot that they couldn't walk up the driveway," Vindum said.

Vindum eventually replaced the Teslas with a gasoline-powered Audi from the insurance payout, which covered the Blue Book values of the cars. He was disappointed, he said, in what he described as Tesla's lack of interest after the fire. The charred shells of the cars sat in the couple's driveway for weeks "waiting for Tesla to assess what went wrong."

"They never showed as far as I know," Vindum said.

The fire at his home changed his perspective on whether vehicle fires present a unique risk for owners of electric cars.

"Gasoline driven cars don't catch fire in the garage when they're sitting there. And that's the difference," he said. "I don't worry about [my] Audi catching fire downstairs when it's not running."