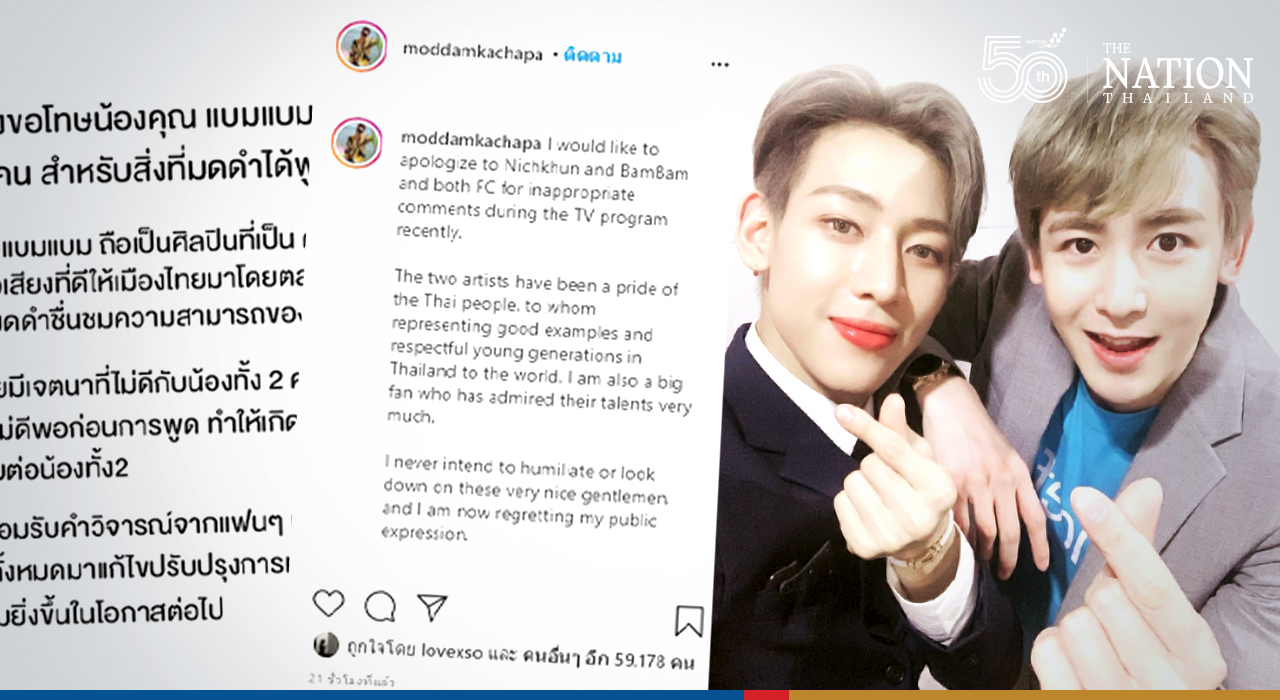 A well-known TV talk show host issued a public apology over the weekend for “unfairly” comparing Thai artists who have made it big overseas.

The incident took place not long after Lalisa, known in the entertainment industry as “Lisa Blackpink”, launched the music video of her first single “LALISA” on YouTube.

The video drew more than 100 million viewers overnight and became a hot topic of discussion.

In his show, Kachapa said: “Lisa is the pride of Thailand. We haven’t seen a superstar go this big. We had Nichkhun and BamBam earlier, but they were never this famous. Lisa is a real world-class superstar from our country.”

This remark, however, angered the fans of BamBam and Nichkhun, who immediately launched the #BanModdum hashtag on Twitter. The fans said comparing the artists was inappropriate and unfair as everyone was doing their best and had earned a name for the country.

The talk show host then posted an apology on Instagram on Saturday, saying: “I want to apologise to Nichkhun and BamBam and both their fan clubs for making inappropriate comments during my TV programme recently.

“The two artists have been Thailand’s pride and are good examples of well-mannered, polite Thai youth. I’m also a big fan who admires their talent very much.

“I never intended to humiliate or look down on these very nice gentlemen and am now regretting my comments. I would, therefore, like to apologise for my bad judgement and accept the condemnation.

“I hope those who love and care for Nichkhun and BamBam will forgive me. This lesson will also teach me to do a better job in the future,” the post read.

Kachapa added that would apologise again in his show on Monday.

His apology was met with a variety of comments, some complimentary and some insulting.

Lalisa, who has earned a name for herself as a member of the K-Pop girl group Blackpink, released her first solo music video “LALISA” on Friday. The music video, which featured Thai costumes and cultural references, immediately became a huge hit in Thailand.

Meanwhile, BamBam underwent rigorous training in South Korea for three and a half years before joining the famous GOT7 boy band.

Nichkhun, meanwhile, is a Thai-American singer, songwriter, rapper, actor and model who is also a member of the popular South Korean boy band 2PM.