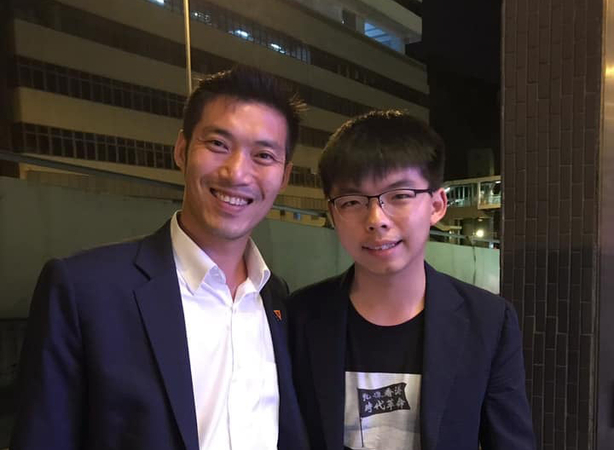 Future Forward leader Thanathorn Juangroongruangkit has clarified that his photo with democracy activist Joshua Wong was taken during a seminar he had attended earlier this month, rebutting accusations that he was meddling in Hong Kong’s pro-democracy protests.

His clarification comes after the Chinese embassy in Bangkok warned Thai politicians not to support pro-democracy protesters in Hong Kong while the Thai Army chief General Apirat Kongsompong accused him of meddling in the protests.

In a message on Facebook posted on Friday (October 11), he explained that he had been invited by The Economist to deliver a speech on “Inside the Minds of Asia’s Next Gen Politicians” at the “Open Future Festival” in Hong Kong on October 5. He was part of a panel that included Tim Wilson, member of Australia’s House of Representatives.

After the speech, Thanathorn said he had met and talked with Joshua Wong, who had attended the event, and the photo was taken at that time. He said in his post that was the first and last time he had met the activist. “I am not involved with any political parties in Hong Kong and have nothing to do with their politics in future,” he said .

He said it was normal to have conversations with some people at a seminar and also take photos with them. He said he had the chance to talk to many people at the event like Shaun L Rein, who wrote “The War for China’s Wallet”.

Thanathorn said Shaun represented China Market Research Group and he toed Beijing’s political line but even he agreed that Hong Kong needed to reduce the inequality between the rich and the poor. “Shaun criticised the protests in Hong Kong and debated with Joshua on the issues at that panel,” said Thanathorn.

He insisted that it was normal for people to exchange ideas and opinions and it was a good chance to learn from their opinions. Thanathorn also posted his photo with Shaun in his post.

Thanathorn said he supports the Basic Law of Hong Kong under the “One country, two systems” principle and supports Hong Kongers’ right to choose their executives as stated in Section 45 of the Basic Law. He added that he supported freedom of speech and its expression in a peaceful manner. Thanathorn said he wished to see the situation in Hong Kong resolved peacefully without violence.

He slammed the attempts to use his photo with Joshua and cast aspersions on his motives without any proof by some local mass media and some people.

He said Army leaders had been trying to make wrongful use of the photo to create hatred in Thai society.

He urged people to receive information from all sides before forming an opinion and reiterated that the Future Forward Party aims to advance democracy in Thailand and promote equality in society to ensure a better future for coming generations.

Army chief General Apirat Kongsompong on Friday (October 11) displayed an image of Thanathorn with Joshua Wong at a special seminar held in the Army headquarters and said that Thanathorn had travelled to Hong Kong and taken the photo to encourage the protesters.

The Chinese embassy in Bangkok on Thursday posted a message on its website, warning Thai politicians to stay away from the Hong Kong protests. The statement said that some politicians from Thailand had even met with the pro-democracy activists. This act, which boosted the arrogance of the activists, is extremely wrong and irresponsible, the embassy statement said.

“The Chinese side hopes that the relevant persons can see through the nature of the issue, be discreet in word and deed, and work more for the friendship between China and Thailand,” the Chinese Embassy added.