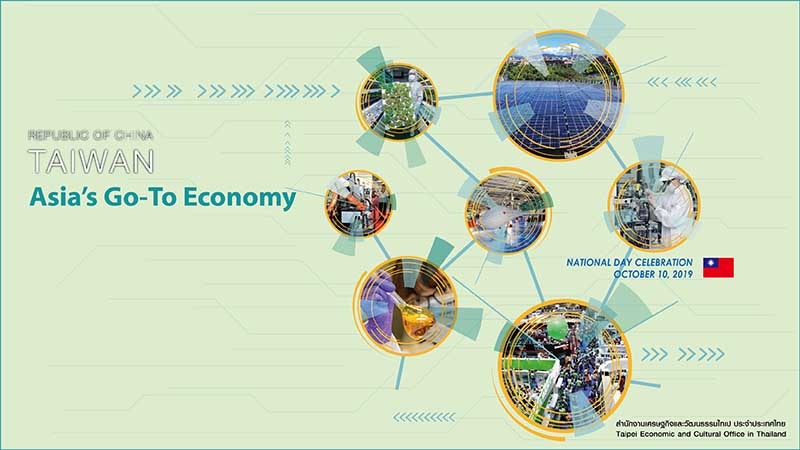 1. Overview of current affairs in the Republic of China (Taiwan)

1.1 Remarkable economic performance: The government’s efforts to transform Taiwan’s industries since 2016 have translated into a series of successes. According to data from the Directorate-General of Budget, Accounting and Statistics, Taiwan registered 2.46 percent economic growth in the second quarter of 2019, the highest among the four Asian tigers. The economy has been projected to grow 2.67 and 2.9 percent in the third and fourth quarter of the year, respectively, and an even stronger performance is forecast for next year. The benchmark weighted index on the Taiwan Stock Exchange, or TAIEX, remained above the 10,000 mark for the longest period ever, and unemployment rates have steadily declined, reaching a 19-year low. The Global Competitiveness Report 2018, published by the Swiss-based World Economic Forum, ranked Taiwan 13th in the world among 140 countries surveyed. This put Taiwan at fourth in the Asia-Pacific behind Singapore, Japan, and Hong Kong, but ahead of Australia, South Korea and New Zealand. Taiwan was also recognized as one of four super innovators—the others being Germany, the United States, and Switzerland—and shared the top spot in macroeconomic stability. Its financial system was also ranked seventh worldwide.

1.2 Outstanding success in attracting investments: On July 23, 2018, the government established the InvesTaiwan Service Center to attract businesses and improve Taiwan’s investment environment. Foreign enterprises have since increased investments in Taiwan. For example, Supermicro, a world-leading supplier of server systems, channeled additional funding into its Taiwanese facilities, bringing its total investments to NT$10 billion (approximately US$333 million). Google also announced plans to expand investments and operations in Taiwan, while Japan-based Honda invested NT$4 billion (US$133 million) to boost production capacity at its Pingtung plant. Meanwhile, the government has striven to assist returning Taiwanese businesses in settling such issues as land, power and water supplies, labor, and human resources. This year has seen a record number of overseas Taiwanese businesses moving back home. As of September 2019, these companies have made total investments of NT$580 billion (US$19.33 billion) and created 28,500 jobs in Taiwan.

1.3 Upholding steadfast diplomacy and consolidating diplomatic relations: In March 2019, President Tsai Ing-wen visited Palau, Nauru, and the Marshall Islands on her Oceans of Democracy tour, observing the success of Taiwan’s steadfast diplomacy and mutual assistance for mutual benefit, which has bolstered substantive cooperation with diplomatic allies. She also received high-level courtesies from the US during her layover in Hawaii. In July, President Tsai undertook the Journey of Freedom, Democracy and Sustainability, which included state visits to Haiti, Saint Christopher and Nevis, Saint Vincent and the Grenadines, and Saint Lucia, as well as transit stops in the US cities of New York and Denver. This trip set several records for overseas travel by a Taiwanese head of state, including the longest-ever transit stops in the US (four days and four nights) and the first-ever public engagements with UN Permanent Representatives and representatives of Taiwan’s diplomatic allies at the Taipei Economic and Cultural Office in New York.

1.5 Honoring our commitment to energy transition and developing autonomous energy resources: The government has been promoting renewable energy policies in order to steer Taiwan toward the circular economy and an era of sustainable development. We are building offshore wind farms to stimulate the development of a domestic wind power supply chain, which will contribute to industrial upgrading, as well as the development of offshore wind power. The goal is to boost renewable energy power production to 20 percent of Taiwan’s electricity supply by 2025. Taiwan’s first commercial-scale offshore windfarm, Formosa I, is scheduled to be completed by the end of this year. This will bring Taiwan’s total investment in the wind power sector to NT$1 trillion (US$33.33 billion), generate NT$1.2 trillion (US$40 billion) in output value, and create about 20,000 jobs. It will also cut Taiwan’s carbon footprint equivalent to 600 times the carbon dioxide emissions absorbed by Da’an Forest Park in Taipei.

Taiwan occupies an important geostrategic location. Despite facing international challenges, we have remained firm in upholding the core values of democracy and freedom, showing strong resilience and safeguarding Taiwan’s sustainable development. Made in Taiwan is no longer a term limited to components and OEM production; it now represents a new economic development model centered on innovation, artificial intelligence, green energy, and advanced technologies. Looking ahead, our government will continue to pursue policies that promote national prosperity and public wellbeing, and open a new chapter in the comprehensive upgrading and transformation of Taiwan’s economy.

2.1 Enhancing Taiwan’s industrial framework and ensuring sustainable economic growth: Among other things, the past three years saw the government launch the Forward-looking Infrastructure Development Program and the Five Plus Two Innovative Industries program. These plans have stimulated domestic demand and reshaped Taiwan’s global competitiveness. A number of infrastructure projects remain to be completed under these programs; these will generate further domestic demand and underpin stable economic growth. Furthermore, the government will continue to strengthen Taiwan’s industrial structure and the protection of labor rights, and create more opportunities for quality employment, bringing wage growth into line with economic growth.

2.2 Participating in global and regional affairs, as well as key international organizations: Maintaining global and regional economic stability and collective security is a growing concern for the world’s governments. Over the years, Taiwan has played a crucial and indispensable role in regional development, and enjoys high levels of connectivity and complementary relations with many countries in the region. In foreign affairs, our government will continue to forge stronger value-based links, and build a strategically important and unassailable position for Taiwan. We will also seek accession to the Comprehensive and Progressive Agreement for Trans-Pacific Partnership and meaningful participation in such prominent international organizations and mechanisms as the World Health Organization, International Civil Aviation Organization, International Criminal Police Organization, and United Nations Framework Convention on Climate Change.

2.3 Exercising warm and soft power, showing the world that Taiwan can help: As a mature democracy, Taiwan plays a responsible and constructive role in the international community. Through diverse international cooperation and humanitarian assistance, we will rely on the strengths of our nongovernmental organizations and coordinate with the UN SDGs as we spread our warm power in a positive, pragmatic, and sincere manner. Our government will also continue to work with Taiwan’s industries in a concerted effort to share our soft power in such areas as smart technology and innovation, agriculture, culture, health care, education, and social welfare. In this way, we will continue to be an indispensable partner across the globe, making substantial and meaningful contributions.