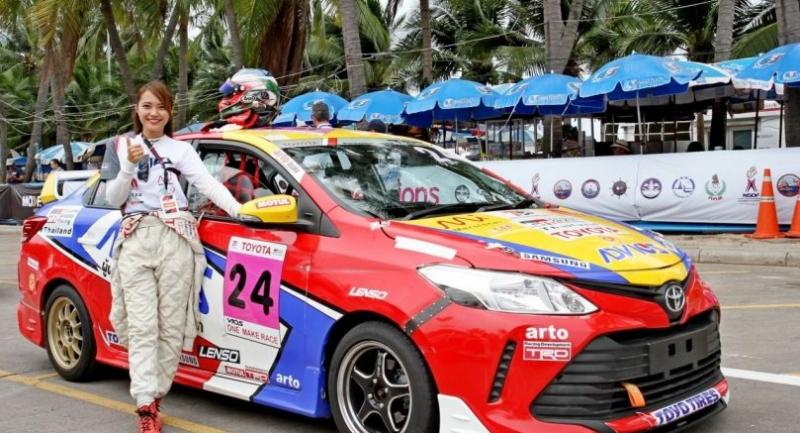 Race queen gets behind the wheel

In 2017, Japanese race queen Miyu Kitabayashi travelled to Thailand to help promote the Advics racing team taking part in the Toyota Motorsport 2018 series as a team pretty, but this year, she returned with a new role – race driver.

Many racing fans would remember the sweet-faced Kitabayashi posing with Advics racers during the five events held last year around Thailand, but few would have imagined her coming back as a racing driver herself at this year’s event.

Advics is a Japanese brake system manufacturer that is active in Japanese motorsports and wants to expand its presence in Thailand, by taking part in the Toyota Motorsport series consisting of Altis, Vios and Revo races.

The 22-year-old is competing in the Vios Lady division along with teammate Ayumi Shijuzuka.

Before the Bangsaen race, Kitabayashi was in seventh place in the standings, finishing sixth in the opening race in Chiang Mai and eighth in the second leg at the Chang Circuit in Buriram.

“I finished in eighth place.  I think I had the speed in the  race, but I

wasn’t able to overtake the slower cars in front,” she said.

The Bangsaen street circuit is put together once a year and features a large number of exotic races, ranging from supercars to club races. The

3.7-km track is known for its treacherous corners and narrow downhill sections, and although overtaking is possible, it’s not easy, especially with similar-powered cars.

Apart from her office work and being a race queen, Kitabayashi has also raced in a ladies event before in Japan. So when she heard about the opening for a position in the team, she pounced on it.

“The company held an audition for lady drivers to participate in Toyota Motorsport 2018, so I took part and was selected,” she said.

However, Kitabayashi isn’t abandoning her previous job here, as a race pretty. While the male drivers in the team are racing, she switches into the race queen outfit and joins them during the pre-race photo shoot.

Other members of the team actually come from all fields of work, for example fellow Vios Lady driver Shijuzuka is a nurse, while Kentaro Tsuchitori, driving in the Altis One Make Race, owns a used car dealership.

It’s the second year racing in the series for Tsuchitori, who came because he thought “racing in Thailand would be fun”.

The  40-year-old has been racing in Toyota MR2 one-make events back home, and was asked whether he was interested in doing a five-leg stint in Thailand last year.

In the 2018 Altis standings, Tsuchitori was in fourth position prior to Bangsaen with 18 points from finishing fifth and fourth in Chiang Mai and Buriram, respectively.

A quick lap during qualifying helped Tsuchitori gained P2 at the starting line, but after the P1 driver, also from Advics, was relegated to last place on the grid due to a regulation infringement, Tsuchitori moved up to P1, started off well, and maintained his position throughout the race.

“I’m 40 years old already but I will try as much as I can to do well here,” Tsuchitori said after his victory.

Asked to compare racing in Thailand and Japan, his first reply was, “It’s hot here!”

“We don’t have street racing in Japan (only circuits), so racing in Thailand offers a different kind of excitement,” he said. “The racing itself is also much more aggressive here with lots of cars hitting each other during the race. We don’t have much of that back in Japan.”

The next Toyota Motorsport 2018 event will be held in Phuket in September, while the final round goes back to the Chang Circuit in October.