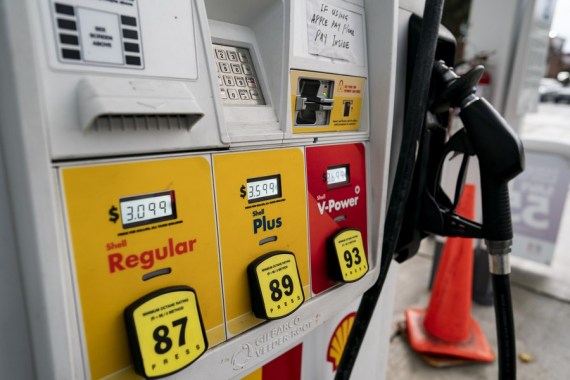 Gas prices across the United States climbed steadily in 2021, rising an average of 1.187 U.S. dollars per gallon for self-serve regular gasoline since early January and reaching the highest level since 2014.

In Los Angeles County, the most populous county of the nation, local medias outcried on Monday as the price rose to 4.419 dollars, the highest figure in 2021, but they closed their mouth after seeing the number jumped to 4.435 dollars on Friday.

According to figures from the AAA and the Oil Price Information Service, the average price is almost 1.236 dollars greater than one year ago.

"These astronomical prices are putting a substantial dent in my monthly budget," traveling sales representative Martin Baker complained to Xinhua. "Gas prices are out of control."

"It's bad enough in LA where I'm paying 4.85 dollars per gallon. I'd hate to be up north in some of the more isolated counties that are really paying through the nose," Los Angeles resident Mike Spencer told Xinhua at the pump.

Industry pundits cited multiple causes for the steady rise in gas prices: impact of the COVID-19 pandemic, hurricanes in oil producing and distribution centers, earthquakes near local refineries, supply chain disruption, and a worldwide slowdown in the production of crude oil.

The global pandemic lockdown slashed automobile usage and created worldwide economic instability and uncertainty. The resulting slump in demand caused oil producers around the world, such as OPEC members, Russia, U.S. Texas, and the Gulf of Mexico, to dial back on their crude oil production from which gasoline is made.

Although global business activity and personal car usage have risen steadily since the introduction of COVID-19 vaccines, global crude oil producers have been slow to increase supply, opting instead to maintain the current, reduced level of supply to preserve the higher price revenues they are receiving per barrel.

"These prices are killing me.  But oil companies have a chock hold on global supply," Max, a Pasadena resident, told Xinhua when interviewed at the pump. "I can't see them caring how these sky-high prices are impacting on little guys like us."

The oil supply problem is not expected to change any time soon, which was confirmed Monday at a meeting of leading oil producers led by OPEC and Russia that voted to keep crude oil production at 400,000 barrels a day in November, instead of doubling it to 800,000 per month as had been anticipated by industry pundits.

This sent the price per barrel of West Texas intermediate crude rising on the New York Mercantile Exchange on Tuesday to 77.62 dollars per barrel, the highest in seven years, and 80.65 dollars on Wednesday then a little fell down before this weekend.

The U.S. Energy Information Administration reported that crude oil prices account for more than half of the pump price, so higher prices per barrel of crude oil automatically mean higher prices at the pump for consumers.
Exacerbating the shortage of crude, consecutive hurricanes sweeping the Gulf of Mexico also bumped oil production offline in the Gulf at various times throughout the past year.

"Approximately 16 percent of crude production in the Gulf of Mexico is still shut down because of Hurricanes Ida and Nicholas and the concerns about what higher COVID cases could do to the economy, and this uncertainty is helping to keep oil prices elevated," said AAA spokesman Andrew Gross in a statement to the press.

Refinery damage due to the Sept. 17 earthquake in Carson of California has also contributed to higher gas prices in Southern California.

However, California residents who had been expecting some reduction in gas prices in Autumn caused by decreased demand after summer vacations have ended are in for some disappointment, predicted Jeffrey Spring, the AAA's Southern California's corporate communications manager.

He predicted prices would likely stay up because the price of crude oil is still clocking in at around 75 dollars per barrel. Some respite may come, according to GasBuddy.com, when gas stations switch to a cheaper winter blend of gasoline from the more expensive summer blend.

The AAA recommended drivers better regulate their gas usage and do multiple errands at the same time, take advantage of discounts such as the Fuel Rewards Program at Shell for AAA members to save money on gas, and try to drive more smoothly, Springer advised.